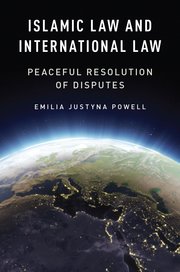 Do states from within the Islamic community exercise different preferences compared to non-Islamic peers when resolving territorial disputes? If so, how do these preferences differ? With Islamic Law and International Law: Peaceful Resolution of Disputes, Emilia Justyna Powell endeavors to answer these questions. In doing so, Powell constructs a framework based on a category of states termed Islamic Law States, which are states that incorporate Islamic law into a substantial portion of their domestic legal system and enforce it against a majority of their population. (There are at least 28 such Islamic Law States.) Through a mixture of empirical study across Islamic Law States and qualitative insights from prominent interviewees, Islamic Law and International Law finely blends hypothesis testing and qualitatively insightful discussion from practitioners, such as Jordanian Prime Minister and ICC judge Awn Shawkat Al-Khasawneh.

Writing primarily as an international law scholar, Powell has provided a robust and prudent overview of dispute resolution preferences and international law (siyar) in the Islamic legal tradition. While reminding the reader that she is no expert in the field of Islamic law, her grasp of the requisite material in Islamic law will inform even those with a mastery in the subject. Powell elaborates on the Sharia principle of sulh– the goal of restoring amicable relations between parties in dispute resolution.[3] More broadly, she claims that the Islamic legal tradition carries a preference of non-binding dispute resolution methods, such as negotiation, mediation, and conciliation rather than binding methods (arbitration and adjudication).

But what aspects of an Islamic Law State’s legal system, whether constitutional or sub-constitutional, correlate with a behavioral track record of non-binding dispute resolution? Thanks to empirical analysis using data incorporating Islamic Law States’ domestic legal systems and international dispute resolution attempts, Powell avoids simplistic conclusions and unsupported theoretical assertions. Rather, Powell’s empirical analysis shows that the community of Islamic Law States does not behave as a monolith. Yet, the empirical results support Powell’s prediction; States that carry certain attributes indicating a commitment to Islamic law exhibit a preference towards less-binding resolution methods when navigating an international dispute.[4]

[2] Rob O’Brien is a second-year juris doctor candidate at UCLA School of Law.